This page reports about the Rockfall Barrier Project presented at the 50th US Rock Mechanics/Geomechanics Symposium held in Houston, Texas, 26-29 June 2016. 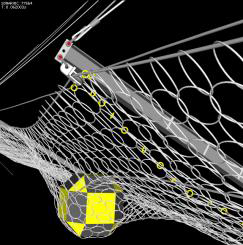 Abstract for the 50th US Rock Mechanics/Geomechanics Symposium held in Houston, Texas, 26-29 June 2016.

In cooperation with the company Geobrugg AG Switzerland, which specializes in security systems in the area of rockfall, we numerically simulated a standard test setup in high resolution in terms of the detailing with the “sonar” simulation software. The certified “Falling Rock Protection Barrier RXE-1000,” which has been intensively tested, experimentally measured and analyzed, formed the basis. The equipment consists in its core of several elastic ring-grid fields which, together with the suspension, can absorb energy of up to 1000 kJ. For the corresponding practical tests, we have detailed results for the movement behavior of the overall system and of various specific parts. Further, comprehensive measurements at various key positions were also taken during the practical trials. Slow motion recordings of the impact from various perspectives complete the base material.

This entire rockfall test setup was then modelled three-dimensionally at very high level of detail (down to the bolts, cables and wires) and simulated dynamically. A comparison of the results shows that in the future, we will be able to make very precise predictions about the dynamic movement behavior of complex systems in full detail as well as associated exact predictions of the physical loads. The match between experiment and theory will be documented in the next steps in a series of video clips that show comparative movement behavior as a function of time of various parts of the system.

The success of this dynamic analysis prompted us to develop a modular system that’s industry-specific in terms of simulation for the rockfall and security-system fields: in the future, this will allow for the creation and simulation of a model of a complete system within a reasonably short time.